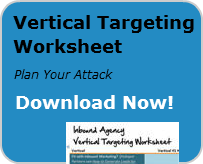 Why Agencies Need to Target for Long-Term Success

Many agencies realize they need to focus on a niche to grow their business....but somewhere between conception and execution, they lose steam and go back to a less focused path.

1. The market for agency digital services is becoming noisier

Here is a story that Pete Caputa, VP of the Hubspot Partner Program and the blogger behind Collaborative Growth Network, often shares. Back in 2007 when the Hubspot Partner Program began, PR2020 was Hubspot's very first partner. Back then, it was not hard to differentiate. Offering inbound services, or SEO, or even digital services in general, put an agency in front of the pack. If you were an agency that understood SEO, social, inbound, or other disciplines, you stood out.

Fast forward to 2014. The market has caught up. There are tens of thousands of digital and inbound marketing agencies in the US and more in the world at large.  End users, and other agencies, have gotten hip to digital marketing. Being an expert in digital marketing tactics is not good enough anymore. Agencies need something else....

2. Domain expertise is the new differentiation, not tactical expertise.

If tactical expertise is not enough to differentiate an agency, what is? The new differentiation is being able to apply those same tactics against a specific customer segment. In fact, it is not just doing it, but doing it well, including with highly tailored case studies, content, and expertise.

Don't believe me? Interestingly, the best agencies are already figuring this out. In a recent survey of Hubspot Partner agencies, fully 66% of Hubspot Gold Partners, among Hubspot's most successful partner agencies, indicate that they have chosen to specialize in one or more specific industries or verticals. Find some actual agency examples of this in the post Why I Want to Spend More Time with Agencies that Target.

In the Hubspot Partner Inbound Success Training series, Arjun Moorthy, Hubspot VP of Business Development & Channel Sales, highlights Trew Marketing, a marketing agency specializing in the engineering and technical markets. Arjun mentions that they "have one of the highest gross margins of any agency I've seen at Hubspot". While Trew certainly has great marketing skills, their margins cannot be attributed to their marketing skills alone. They are equally or more attributable to the targeting lessons Trew has learned and put into place.

Higher margins come in part from commanding client respect. If an agency can define a very specific target niche, it can narrow it's competition dramatically, and in so doing grab the respect and margins that are healthy for its business.

Does this post fall into the 'no duh' category or is it insightful? I might think it's the former except for all the agencies out there who get it, but aren't owning it. Why is that? It's either one of two reasons.

Number 1, an agency does own it,  but is having a hard time executing. This is something I'm going to be working on with agencies over the next several months.

Or...it's number 2, an agency gets it, but they don't 'really get it'. If that applies to your agency, re-read the post. Find examples of agencies that target well and understand how it has impacted their business. Actively wrestle with how important targeting might be for your agency.

If you don't, you might find yourself struggling to break free from the noise, not commanding the respect you deserve from clients, and having margins that shrink over time instead of expand.